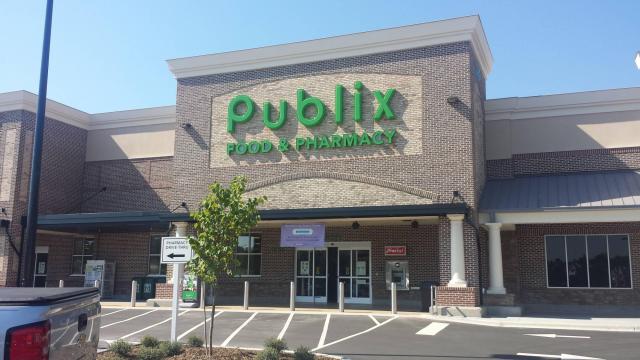 With the opening of the new Publix on at the corner of Heritage Lake Road and Rogers Road in the heart of the Heritage golf community in Wake Forest, a quiet battle is underway to win over grocery shoppers.  The two grocery stores are positioned at what is sought after commercial property, centrally located on the “going home” corner in the heart of the Heritage Wake Forest neighborhood. With 7,000 homes within a 2-mile radius and a median income of $99,500 within a 1-mile radius, both stores will want to capture these neighbors.

The new Publix located in the Shoppes at Heritage Village has now been open one week. With 49,000 sq. ft. of space, the store opened with stocked shelves and shoppers lined up at the front door. There were lots of social media posts from shoppers who hit the store on the first day, many posting pictures of Publix’s coveted key lime pies. The Wake Forest Community Information Facebook page has been busy with posts giving reviews and some complaints as well. To read some of the reviews, simply type in Publix Wake Forest in the search bar on Facebook. Most of the reviews raved about the customer service and the bakery department. One neat tip offered on Facebook was that employees offer to walk your cart out and upon good-byes will give you a coupon for a free store item to be used on your next visit. The store has all of the traditional Publix offerings including a scratch bakery, full service meat and seafood, Publix Deli and fresh produce.  At this time, no other stores are open in the shopping center. The parking lot has been full of cars; time will tell if that is the norm or just the initial opening week traffic. With no other stores open at this time, the full parking lot doesn’t allow for many more cars for those future stores. Word is Publix employees were parking in the Richland Creek Church parking lot and being bused in to the store. Some of the future stores that are being advertised by the leasing company, Columbia Properties, include a Stone Cold Creamery, Rudinos Pizza, Sports Clips, Mr. Mike’s Used Books, Chronic Taco, Nail Spa and Heritage Dry Cleaners. There are also three outparcels and rumor has it a national casual dining restaurant will build on one of them. Entering and exiting the shopping center has been tricky since all the traffic has to flow into and out from Forestville Road until Rogers Road reopens. One of the main shopping center exits will spill out onto Foundation Drive which is the main entrance for Heritage High School. The Shoppes are sure to have a big impact on the students of Heritage High in dealing with the additional traffic but also offering more lunch, employment and shopping options in the future.

Across the street, the established Heritage Station Shopping Center which is anchored by the recently expanded Harris Teeter grocery store has been gearing up to compete. The Harris Teeter is in its final stages of expanding the store by an additional 6,ooo sq ft. The most noteworthy features include a new Starbucks inside, expanded fruit and vegetable section, expanded frozen food options, a pizza center, Asian bar and a gas station being added to an adjacent out parcel. Harris Teeter has always prided itself on its customer service and will get stiff competition from Publix in that category. Harris Teeter mailed a coupon offering four $10 off a $50 purchase coupons to be used over the month. In addition, they will accept Publix coupons and doubling manufacturer’s coupons up to $.99. They are also winning over many customers who choose to use their Express Lane service. Order online, pick up and drive home is the tag line for this service. The service fee is $4.95 per use or unlimited usage for a $100 year. There are entire blog pots dedicated to the benefits and pitfalls of this service. Here is one that I found really fun and informative from a blogger/ Harris Teeter shopper in Virginia:  http://wikivirginia.com/is-it-worth-it-harris-teeter-express-lane-online-shopping/. Often they will waive the service fee if you purchase an advertised item on the site. The Wake Forest Harris Teeter will become one of the grocer’s larger stores with a 57,723-square-foot footprint. With the expansion, the center will be 100 percent occupied. Two of the newer shops the center include Wine and Design and Vision Marital Arts. During peak shopping times, the parking lot is extremely full as well. Perhaps ease of getting into the centers and parking will be a factor is people’s decision to shop at Publix vs. Harris Teeter. Many will argue that it will come down to food prices, we will have to sit back and see how this competition plays out.